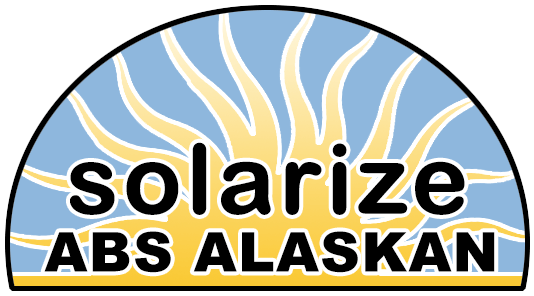 ABS Alaskan, Inc is an Alaskan corporation. We started in 1990 in Fairbanks as Alaskan Battery Supply, taking over from Alaska Battery. A couple of years later we bought out Alaska Husky Battery in Anchorage. In 1994, we incorporated as ABS Alaskan, Inc. We have maintained stores in both Anchorage and Fairbanks ever since. As the names suggest, our product line initially consisted of batteries and battery related equipment and accessories. In 1992, we brought in a few solar panels and expanded into the renewable energy field. This was a natural progression as batteries are core to off-grid renewable energy systems.

During the 1990’s the renewable energy product line slowly expanded into wind turbines, solar thermal, and hydro. At that time, most systems were off-grid. It wasn’t until 2005 when Golden Valley Electric Assn (GVEA) in Fairbanks introduced their SNAP co-generation program and then, in 2009, when Alaska adopted the Net Metering regulations, that on-grid renewable energy systems started getting popular.

Through the years we have designed, supplied, and installed many, many off and on grid renewable energy systems and remote power systems. For six years we were the primary contractor designing, installing, and maintaining the wind monitoring program for the GVEA Eva Creek Wind Farm. We were the first to develop hydro-kinetic systems in Alaska with successful pilot programs at Ruby and Eagle, Alaska.

One of our most recent projects was the design, supply, and installation of a 563 kW solar farm in Fairbanks for Golden Valley Electric Assn. This is the largest solar farm in Alaska, incorporating 1,760 320 watt solar panels and 440 micro-inverters. This project was installed in the summer of 2018 and was completed on-time and on-budget.

We used the same solar farm micro-inverter technology for the Solarize Anchorage and Anchorage Solar Project systems, and will be using it again for solar systems for Solarize Fairbanks, Kenai and Homer. This technology is time-tested and reliable. It has numerous advantages over other types of on grid solar PV systems. Real-time on line monitoring allows you to see what is currently happening with your system, as well as historical performance data.

The system is literally “plug and play” so it is very simple (and inexpensive) to install and maintain. Each solar panel is its own “PV array” so is unaffected by shading or other performance issues with the other solar panels. And it inherently meets the NEC Rapid Shutdown System (RSS) requirements, so no additional, expensive RSS components are necessary. The system integrates nicely into your existing service entrance. And the communication/monitoring equipment just plugs into a wall receptacle and connects to your internet router. Easy and simple. You will love this solar power system.